An Eldoret man who was killed days before he could travel to Finland to continue his education has been buried in a moving ceremony.

Kelvin Kipng’etich was brutally killed while at Kimumu Estate Eldoret a few days ago on October 5, 2022. His body was found near the door of his residence the next morning.

Yesterday, Saturday October 15, family and friends gathered for the 26-year-old’s farewell and from the photos shared, many could not hold back their pain. 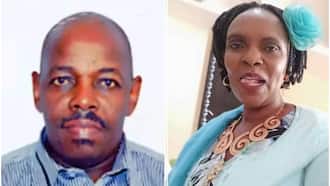 George Mwangi: a businessman killed fears for his life after a disagreement with his wife

Eunice Chepkorir, who spoke to the media after his death, revealed that the young man had completed his bachelor’s degree at Maasai Mara University and was preparing to move to the European country.

She said a fundraiser to raise money for her trip was planned for this week.

In a separate incident, Murang’a representative Betty Maina was recently devastated by the death of a woman she had recently hired as an office manager.

Rosebelle Sherishe died in an accident and Maina couldn’t hold back her pain after hearing the news of her untimely death.

In an emotional post on social media, the rep said it was painful to lose the woman she had just hired; she said Sherishe also quit her teaching job to campaign for her. “I’m broken beyond words; I’ve known you for years from your good days at Mugoiri High School; what happened, my daughter? Why the accident? But you had to report to the office? What did it really happen? you decided to be bold enough to resign from your job as a teacher at Njumbi high school to join me in politics,” she said.

She recalled her last moment with the office manager last Thursday when they met to discuss Murang’a’s progress.

Choose the best bonus in Finland

One of the most popular incentives to attract customers is a casino bonus. The question now becomes, which casino bonus should you choose? Although not all bonuses are created equal, certain factors can help guide your decision. For example, if you’re looking for something good and fast (and who isn’t?), then maybe a no deposit […]

A A workers’ strike against a papermaker in Europe is causing paper shortages for printers in the United States, an example of the supply chain issues plaguing a global economy struggling to emerge from the pandemic. Thousands of workers at factories operated by UPM-Kymmene in Finland have been on strike since early January, and although […]

In the first half of this year, Finns lost some €3.8 million to online romance scams. The typical victim is in a vulnerable position, generous and ready to help others. A scammer can stay in touch with a victim by patiently and skillfully building a relationship through messages for months, sometimes even years. Image: Arash […]