Recalling an earlier observation of David Morgan’s art, which is part of an exhibition at the Sisao Gallery.

Whether you like the gallery exhibits, new murals, or free admission to the museum, you have plenty of great options for the first Friday of this month. Here’s a look at 10 places to see art, along with a friendly reminder that several creative spaces expect patrons to wear masks.

Head toward Sisao Gallery at Oasis on Grand to explore the works of over 20 artists with varying styles, including Robert Gentile, Monique Sanderson Mata, David Morgan, Tara Sharpe, Spawk and Lucretia Torva. On the first Friday, from 6 p.m. to 10 p.m., you can also listen to music from Snailmate, Tay Da Crow and DJ 001.

Detail of another desert fall (archival inkjet print, 2020-2021) on display at Eye Lounge.

Support the independent voice of Phoenix and help keep the future of The New Times free.

Megan Driving Hawk presents three bodies of work in her first exhibition for Eye Salon, which is entitled “The first year: accepting the health space that maternity occupies”. Through photographs, beaded emblems and poetry, the artist seeks to “demonstrate how the choices of the present can heal the past and the future”. First Friday hours are 6 p.m. to 9 p.m.

“Passing on our landscape”
Xico inc.

Xico inc. presents an exhibition entitled “Rethreading Our Landscape: I Am the Project”, which features works by Ximena Echeverria, as well as the “Disruptive Art” exhibition featuring works by Papayon (Roberto F. Salmon). During the hours of the first Friday from 6 p.m. to 9 p.m., you can also see a selection of works from a recent Mexican-American cultural exchange exhibition.

Look for Musical Waters by Joan Waters in the “Fire / Earth” exhibit.

The art gallery at FOUND: RE Phoenix, which will be open from 7 p.m. to 11 p.m. on the first Friday, features a landscape exhibition of metal and fire featuring pieces by Aryana Londir and Joan Waters. Inside the hotel, look for another landscape spectacle with works by over 60 artists, as well as live paintings by Kelly Finucane.

See the work of Michael Price in the “Plus One” exhibition at Five15 Arts in Chartreuse.

‘One more’
Five15 Arts at the Chartreuse

Once a year, each member of the Cinq15 Arts collective invites a guest artist to show his work alongside him for a collective exhibition. This year’s guest artists include Bob Diercksmeier, Jeff Falk, Monica Gisel, Aimee Ollinger, Richard Pomraning and many more. The exhibition includes works in several mediums, including ceramics, mixed media and printmaking.

Look for Emma Annette’s self-portrait in the “after / works” exhibit at the Phoenix Art Museum.

Phoenix Art Museum admission is charged from 3 pm to 7 pm on the first Friday, and tickets for the special exhibit called “Fearless Fashion” will cost just $ 5. While you’re at it, explore Ann Morton’s “The Violet Protest”, a large-scale fiber art installation seeking to “unite creators of various political ideologies and encourage bipartisan collaboration.” And don’t miss the artwork from the staff of the Phoenix Art Museum on display in the “after / works” exhibit in a small gallery near the museum store.

Museum heard admission is free from 4 p.m. to 8 p.m. on the first Friday, when you can explore several current exhibits, in addition to the ‘Small Wonders’ exhibit filled with jewelry, fetishes, and other small-scale works and’ All at Once: The Gift of Navajo Weaving ”, which presents dozens of textile works by contemporary artists. The museum’s café and bookstore will be open from 5 p.m. to 7 p.m.

Look for Zachary Justin’s mural on a shipping container gallery in Roosevelt Row.

Look for a Zachary Justin mural recently created for the Uncontained Project, which showcases Latinx and Indigenous artists. It is located on a pop-up shipping container gallery in Roosevelt Line. While on Roosevelt Street, look for the new mural that rises on Carly’s Bistro building to commemorate murdered artists David Bessent and Zachary Walter. 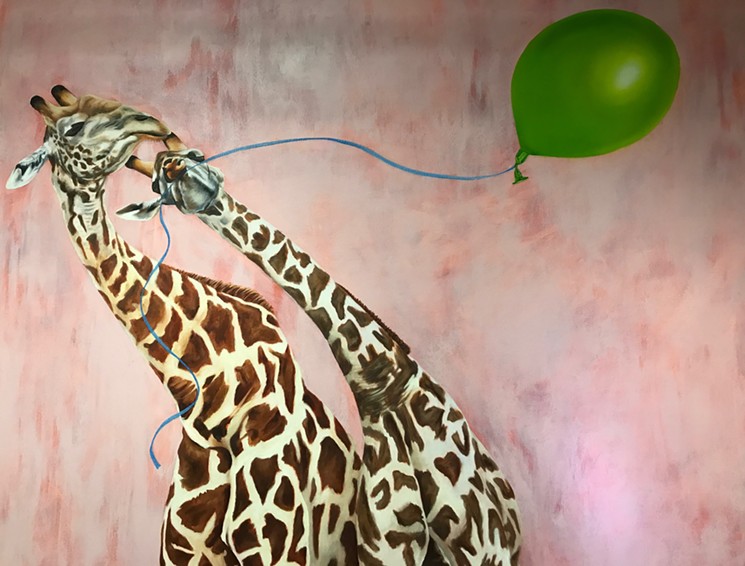 Back to an observation of April Howland’s work at the Tempe Public Library.

Beach party
Beehive on the 16th

Beehive on the 16th organizes thematic events on the first Fridays. This month it’s a beach party theme. From 6 p.m. to 9 p.m., you can visit the studios of several creatives, discover a photo booth and buy drinks at the on-site café-bar. Participating designs include Keri Mosier of Mer.Made Jewelry and Angela Howland of Howland Studios, among others.