As Finland Maple League ends its 2022 season with the Maple bowl between the Kuopio Steelers and Seinäjoki Crocodiles, there is one thing certain, regardless of the outcome of the match.

Principal photography of the action will be world class. Simply because Jari Turunen is behind the lens.

The veteran is the reference photographer for the Finnish American Football Federation, SAJL, and his footage can be found to tell the story of nearly every major top league game.

“Jari is invaluable to put it simply. His photography is top notch and he prepares it immediately after every game. He is world class. Without his images, the stories of our games would definitely be boring.

In a fascinating interview, Jari talks about how he started as a player and got interested in photography, how he plans every game and how luck plays a major role. It also explains the daunting task of choosing the right photographs to publish.

AFI: How did you come to photography?

Turunen: I started in 1980 – many were still quite young at the time. I was 13 when I received an old system camera from my cousin. I took photos of everything that interested me as a kid – mostly my own stuff, like dogs and scouts. At the time, if I shot one film per month, it was 24 photos per month and my money was enough at the time.

Photography was different back then anyway. The camera had a light meter but nothing else and the focus was manual so it didn’t really work for sports photography, for example.

Canon 10 was my first digital camera which I bought in 2004. Then I started photographing my children’s hobbies. At the beginning, it was motorsport, mainly karting since my son Roope took part in it. He ran twice at the European Championships and for example, among other events, I photographed him in Sarno, Italy. And when my daughter Julia (2016 World University Champion and 2021 Finnish Champion) started playing floorball about 15 years ago, I started taking pictures of that too and I still am. AFI: What attracted you to American football?

Turunen: I discovered American football when I went with a friend to practice the Wolves team in my hometown, Joensuu, in 1985. At the same time, children of my age went to play floorball in Josba, Joensuu, but we were more interested in American football. The first practice matches were in 1985 and the first real matches in 1986. One winter of 1987 I trained with the Helsinki Roosters but never really played there because I went back to Joensuu before that.

In the early 1990s I transferred to the Kuopio Bobcats and when the Varkaus Steelers were founded I was one of five player coaches who transferred from Kuopio. When the Steelers played in the Maple League in the early 2000s, I was still a player there.

I loved and still love the physicality of the sport, especially the tackles. I mostly played defense as a defensive end, but also on the offensive line.

AFI: When did you start photographing AF games? AFI: Is photography your full-time job?

Photography is just a hobby for me, and I made an ethical choice not to compete with those who do it for a living.

AFI: Do you take a different approach when shooting AF games?

Turunen: I photograph American football like a defender. In principle, I always photograph attacks, but taking photos requires anticipation and positioning yourself correctly. You cannot anticipate if you place yourself badly. In other words, you have to be in the right place at the right time on the sidelines to be able to capture what you want.

American football is as if it were made for photography: the uniforms are colorful and there are new situations on the field all the time. But if someone invented invisible judges, the job would be easier. Several times, the buttocks of the referees have been filmed and are in the photos. 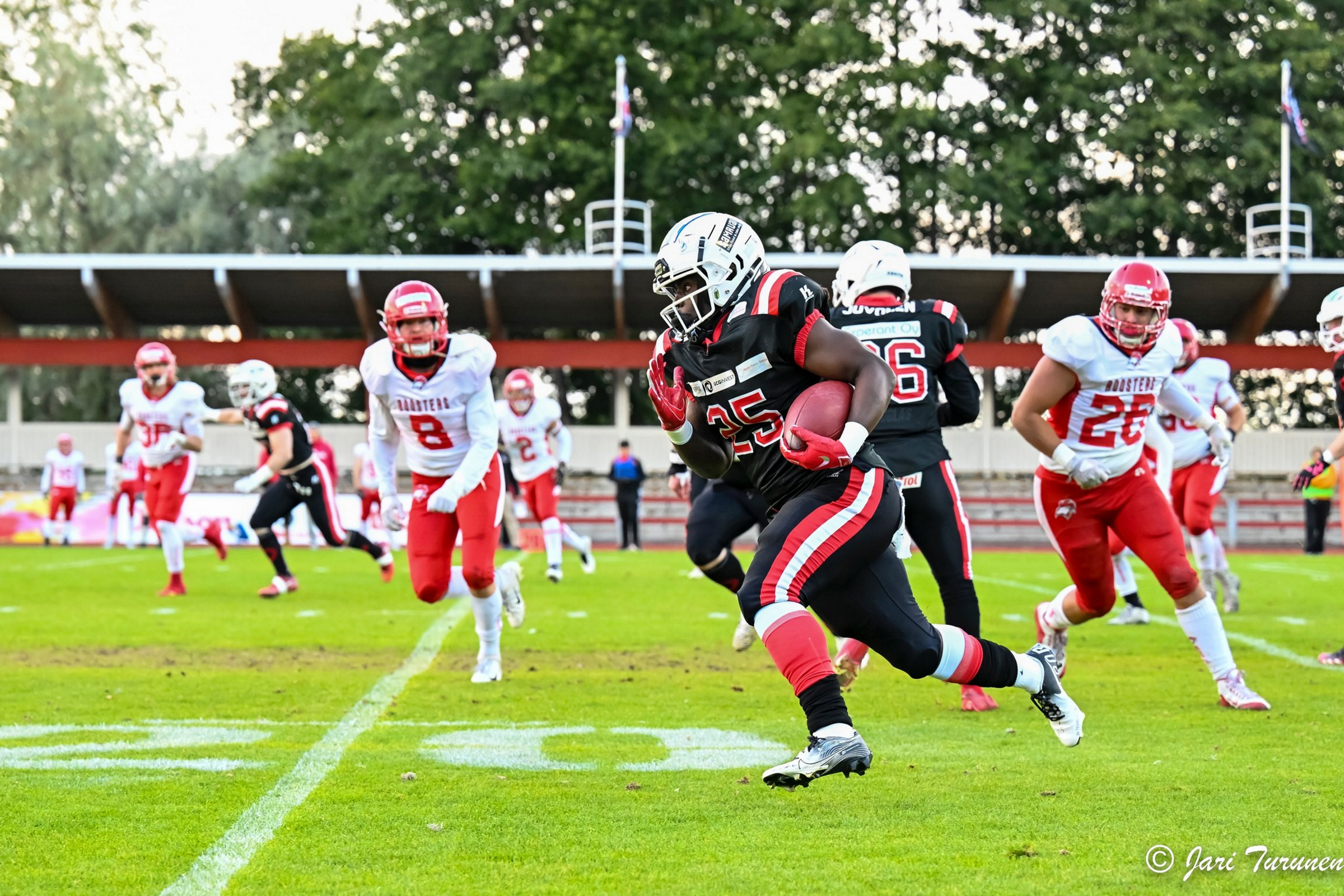 AFI: Tell us a bit about a typical match day.

Turunen: The first thing to consider is the weather conditions. It defines the equipment I have to take with me and the lenses with which I can shoot.
I usually arrive at the match venue about an hour before the match starts. Usually the first hour goes by meeting and greeting all the familiar faces, then I start taking pictures. I always check which team is shooting and based on that I choose which side to shoot.

After the game – for example in Helsinki – I usually sit in my car for the next few hours. I transfer the images to my computer and select the images that I save and among these those that I will process. I take around 2000-3000 photos of each game and I take full files which means they are in RAW format which is why the files are so large it takes 10 minutes to transfer them to the game. ‘computer. There may be many images that look the same and I go through them and remove the extra ones. In the processing phase, I do noise suppression and a slight sharpening. I shoot horizons straight because I don’t like players appearing to be running uphill or downhill. Then I also adjust the lights and shadows. It is important to me that I do not change reality. I don’t add anything and I don’t take anything away, I just make adjustments.

I think there are still too many photos posted – ideally there could be around 20 quality photos. In my opinion, not all of them are as good as pictures, but I think players like to see them. Photos with a lot of subjects are usually the most viewed – in other words, people want to find themselves in the photos.

It usually takes me about 2-3 hours after the game to post the photos, and the whole shooting day is about six to seven hours. That’s why I prefer to pick matches where teams also post photos – that’s where I know time hasn’t been wasted. This is the reward for me.

The next time you’re reading about a game or just looking at the action photos, be sure to write down the photographer’s name. If it is a Finnish game, most often you will find the name Jari Turunen.

Mahindra & Mahindra (M&M) announced on Monday that it has increased the stake in Finnish branch Sampo Rosenlew Oy to 100% with the acquisition of shares for more than Rs 35 crore. With the announcement, the tractor maker’s stock rose by 1.5% to Rs 1,180.15 on BSE. The stock is 1% off its 52-week high […]

Most social security benefits provided by Kela are only available to those planning to stay in Finland permanently, but eligibility for benefits may also be based on employment. In addition, there are situations where there is a right to indispensable subsistence. Everyone in Finland has the right to receive emergency medical care. Reception centers are […]

The good people of Finland say they are ahead of the UK and most of the world when it comes to the environmental crisis. I wanted to know more, so I packed my bags and headed to Helsinki to ask the tough questions. I’ve met with politicians, business leaders and members of the public to […]